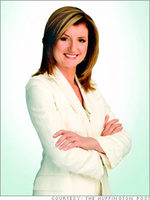 Yesterday at the MarketingProfs event, Ariana Huffington took the stage for a keynote presentation sharing some lessons she has learned about building a successful blog network with the Huffington Post. Though she definitely ignored my advice to speakers about spending some time at an event to get to know the attendees (she was barely off the stage before heading out the door), she did share some interesting points in her talk that should be useful to most marketers: