The last thing I expected to do as I headed down to Austin last week for the SXSW Interactive Festival was to see a film. As a marketer, the fact that SXSW is actually a huge Film and Music festival is a point that I have often easily forgotten. Amongst the sea of startups promoting everything from “social weather” apps (that let you share your mood when it rains), to new indestructible iPhone cases – it is easy to get lost in the hype. 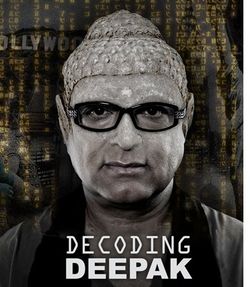 But on Sunday morning at SXSW, I made my way out to the Paramount theater for a world premiere of a film that probably seemed a bit out of place at the festival anyway. A filmmaker named Gotham Chopra was premiering his new documentary called Decoding Deepak about following his father, spiritual guru Deepak Chopra, around the world for a year. I admit, I am personally connected to Gotham and his family so I probably would have seen the film regardless of how it was. You have to support your friends. The thing is, I didn’t expect it to be quite so good. I didn’t expect to takeaway the most profound marketing lessons I learned at SXSW not from any panels or sessions, but from a documentary. And I certainly didn’t expect to see it twice in three days. But I did.

Rather than try to summarize the film, I’ll let you watch the excellent trailer below. Go ahead, I’ll wait till you’re done and then share a few of the marketing and business lessons I took away from the film below:

In a word, the film was brilliant … on several levels. Not only do you get a sense for the real person behind the myth of the spiritual celebrity that Lady Gaga calls “the most influential person in her life,” but you take a journey through what it took for him to become this icon. Despite it having been more than a week since seeing the film – some of the leadership and marketing lessons I took away from it are still fresh in my mind:

During the Q&A session after the film premiere in Austin, Deepak Chopra mentioned that he was sitting near the back of the theater and noticed that no one left during the film. When the moderator asked him why he thought people might leave, he said simply, “documentaries can be boring.” They definitely can – but Decoding Deepak is different.

Whether you are interested in learning more about the evolution of the larger than life spiritual guru Deepak Chopra, or just want to take away a few great insights to improve your business or your career … this is one film I highly recommend actually going to see in the theater as soon as it comes to a screen near you. You might even want to see it twice.