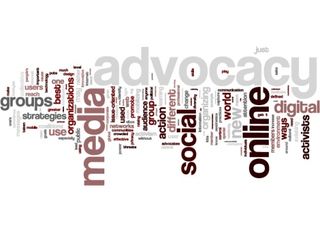 On Friday last week I had a chance to attend a "charrette-style" unconference called Changemakers put on by the University of California – Santa Barbara and their Center for Information Technology and Society. The attendees included people from the Sierra Club, MoveOn.org, Deloitte, Stanford, and thinkers like my friend and fellow Zero G buddy Doc Searls and organizer Dave Toole from OutThink. The day was focused on digital advocacy and the role of social media in furthering cause based communications.

As is sometimes the case with more discussion based conferences, I found the day raised more provocative questions than it answered. Sometimes it is the questions, however, that lead to the newest thinking, so I thought for a recap post I would share some of the biggest questions to arise in the hopes that they may spark a wider discussion:

Q – Does conversation online cause more noise than action?
A – This was the big question that came up early in the event and judging from a few responses to the question I saw over Twitter people feel pretty strongly about the relationships between the two. For my part, I think that conversations do play an important role in sparking action, even though it may sometimes be difficult to attribute some of that action directly back to the right people.

Q – Is an effort successful if it achieves it's aim, but without your getting credit for it?
A – Perhaps at the heart of this question is one of belief. Do you believe so strongly in the cause that you want it to succeed at any cost, or is the credit and visibility for yourself and your organization as important. This, I think, will continue to be a key question as we deal with the rise of the "blego" (blog ego) and newly minted online superstars every hour.

Q – What if our demographic doesn't use computers or social media?
I see this point coming up often in meetings both related to digital advocacy as well as campaigns in other industries – often targeted at older audiences. It is something of a false question, because often it is based on an assumption that simply doesn't hold true about how many people in that group are actually online. This is one of the fastest growing segments online and will likely continue to be in the coming years.

Q – How can the leadership of a community authentically claim to speak for a group?
This was a common question that came up from those who had organized groups online and now wanted to be sure that they were, as an organization, accurately reflecting viewpoints of those in the group. My advice on this point was to be sure that you were looking at whether a group was formed by affinity or demographic before making assumptions. A group of college students who are in the same graduating class may not believe in the same causes. If they have gathered to support an issue, however, then you can more easily speak for the group.

Q – What causes must be institutionalized and cannot be furthered by individuals?
One particularly eye opening moment for me at the event was when the conversation turned to causes where people affected by them cannot mobilize on their own. One example of this is homelessness, which required a coordinated effort in order to attack it. It also is an important reminder that no single strategy can work for every cause.

What do you think about these questions? Any big ones you would add?

3 thoughts on “5 Provocative Questions In Digital Advocacy From Changemakers”