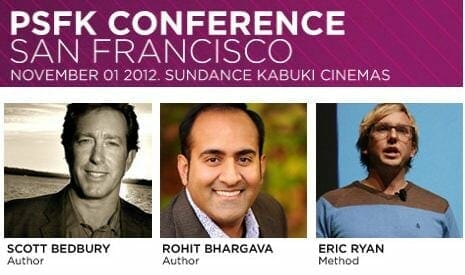 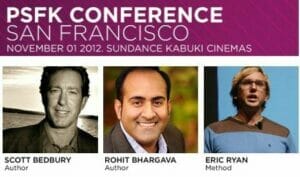 Groucho Marx once quipped, “I don’t care to belong to any club that will have me as a member.” I always feel his sentiment just a little bit everytime I agree to speak at any event because I am passionate about trying to share the stage with people much smarter than I am. So when Piers Fawkes invited me to speak at the latest installment of his well regarded PSFK conference, I thought immediately of Marx’s words. But then he told me I would only have ten minutes, as most of the other speakers would as well … and I immediately felt better. This wouldn’t be your average business conference.

The event lived up to its expectations. Despite an understandably reduced crowd (thanks to the Hurricane), we all gathered at the Kabuki Sundance Theater in San Francisco as branding gurus, designers, architects, educators and entrepreneurs all took the stage to share groundbreaking new ideas on the future of business and culture. In a few weeks, all the video from the event will be available online, but in the meantime – here’s a short recap of some of the most profound ideas that I took away from the day of speakers:

Scott Bedbury, the branding legend behind both Nike and Starbucks offered a quick glimpse behind the scenes at building both brands. We were treated to an image of the whiteboard where he and his team first laid out the principle and insight behind the “third place” strategy for Starbucks, and some basic principles on doing branding right. One thread throughout was his positive relationship with his agencies and his advice: don’t short change your creative team, otherwise the work they produce for you will suffer.

Creator and photographer Chase Jarvis is used to giving away great thinking for free – but now he’s on a mission to do that at a much larger scale. His recently funded startup creativeLIVE brings together visionary thinkers to offer online education on how to be more creative and improve your life. As many schools focus on science and math, teaching creativity has never been more important, and as Chase noted in his talk: “everyone deserves access to the top 1% of teachers in the world.” I’m already thinking about how I can create my own course to offer there.

You may not realize this, but 4 out of 5 Americans take some combination of medication and dietary supplements. And keeping all this straight is an impossible task. Jason Oberfest wants to help, and his startup Mango Health has an app that reimagines how game design can help each of us to become healthier by tracking our own habits and getting rewarded for it. As health costs soar and awareness of healthy (and unhealthy) behaviour rises, tools like this have the potential to actually change behaviour for the positive – and that’s good news for all of us.

4. The story of the maker can reinvent retail. (Dana Cho & Beau Trincia, IDEO)

Over time, each of us have become more disconnected from the products that we consume on a daily basis. But social media is helping to close that gap, as new apps promise to take us behind the scenes to look at everything from overseas labor practices to carbon footprints. The opportunity, as Dana Cho and Beau Trincia from IDEO shared in their presentation, is for brands to embrace and proactively share their “story of the maker.” In a world where people long for that human connection, taking them behind the scenes (as brands like Rawley Denim and Etsy are doing) can create die-hard fans and inspire coveted brand loyalty … not to mention sell more stuff at retail.

5. The future of marketing is about sharing value, not money. (David Deal, iCrossing & Jermaine Dupri, Global14)

People connect with one another because of shared passion … and they click a button to become “friends” for far more trivial reasons. In this interview style presentation, Jermaine Dupri shared the motivation behind creating his own social network Global14 based on shared passions for music, culture, life and women. The build in motivation for participation is because people love to share their interests more than anything else.

6. Sitting on a couch next to one another is the ultimate engagement. (Joe Gebbia, AirBNB)

The story of AirBNB is one of random unexpected connections, and everytime you see a founding member talk about the site … they tell these stories. People unite through this deeply personal moment of opening their homes to strangers, and an idea that any critic might have easily found reasons not to do is slowly turning into a movement that is not only reshaping people’s lives … but based on the kindness of strangers to open their homes to those stranded by the recent hurricane, it is providing a much needed way to scale kindness in the face of natural disasters.

When Microsoft launched their ambitious new search engine, it has an interesting feature that distinguished it from nearly every other search engine in the market … the homepage featured a single large image that rotated each day. On a rare appearance on stage, the curators of that image Stephanie Horstmanshof and Kristin Dean offered a look at how they select new images each day, and offered many tips for picking great imagery. Chief among them was to build in a sense of ambiguity. People should see and image and want to know more – that is the ultimate goal.

This relatively quick point was part of a fast and furious presentation on the benefits and folly of green building as it stands today by Eric Corey Reed. The presentation introduced the idea of what Eric called “Dodo Sapiens” – a funny way of describing the self destructive behaviour that only humans seem able to produce. Bringing in new ideas like biomimicry and futuristic buildings inspired by nature – his vision was forward reaching and inspirational. Now the only challenge is to try and inspire more people in the industry to change their staid thinking for new innovative approaches. It’s an uphill battle.

In what was easily one of my favourite presentations of the day, Michael McDaniel went through a stunning case study of what it might be like if we could actually reinvent the way that we do modern mass transit. If you watch any one presentation from PSFK online when they come out, this one should be it. The scope of the challenge he and his team at Austin based Frog Design took one was vast … but the solution they offered, and the way they thought through every aspect from the building to the marketing was, in a word, brilliant. Their idea could do more than reinvent mass transit, it might just change they way you approach describing and pitching your own big ideas as well.

One thing I have told my students for years is that there is no skill that they will use more every day than writing. The problem is, most of the ways we use writing in schools suck the fun out of it. So many students grow up hating to write, and never discover a love for it. 826national is devoted to changing this through their broad mission of changing how students learn. With real physical locations in more than ten cities across the US, their mission is affecting kids across the United States. Their venue in DC – The Museum of Unnatural History – was intriguing enough that I already promised to volunteer there when I get home.

With their justified reputation as one of the quirkiest and most creative companies in the world, Method has been reinventing the soap and detergent product categories for years now. But this past year they were acquired and are in the process of merging with a European partner … all of which creates real challenges to maintain that personality and what made them a great company in the first place. In this short presentation, Eric Ryan shared some of the ways that the ethos of the company has been to stay small even in the face of growing products, people and profits. Only companies that make this a cultural priority manage to stay great, and Method is clearly determined to be among them.

A great choice for the final presentation of the day, James Tichenor shared several case studies of projects that the Rockwell group recently worked on to reinvent everything from a Vegas Casino’s lobby to an outdoor space in Silicon Valley. The design philosophy of “choreographing environments” was a perfect way of describing how the Rockwell Group creates precious moments for any of us to experience. Life is not lived in a virtual bubble – and when you bring the digital and the real together, you can create the most powerful spectacles that any of us are likely to experience in our lives. And if you think about it, that is probably the coolest purpose for work that any of us could have.

COMING SOON: Links for all the videos will be coming soon, and I will update this post with them as soon as all the talks are available online.