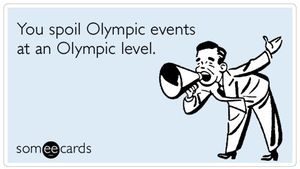 It is just Day 5 of the "Social Olympics" and already social media has taken center stage in good and bad ways. For anyone who hasn't been as Olympics-crazy as me, over the past few days we have seen athletes thrown out of the Games for racist comments made on Twitter, Olympic level whining about tape delays from coverage in the US, people choosing to stay off social media in order to avoid spoilers, and indignation from social media believers about limiting social media usage by athletes in any way.

For all the complaints, though, here's a few facts to consider:

Despite this coverage and access – many people are complaining about the many ways they feel the Olympics are being "ruined" by marketing, or social media, or NBC. Sure, some of the complaints are valid.  But what if none of these things are the real problem?  What if the real problem is you?

Well, maybe not YOU specifically – but "socially savvy people" in general. Socially savvy people are used to sharing every thought and impulse in real time. They expect content online to be free and always available. Everything must be open source, or else it isn't worthy of respect.

Sound familiar? You know people like this, I am sure. So do I. The problem is – their oversharing sometimes ends up poisoning all of our lives. Their desire to turn every one of life's moments into a status update means they may be missing the very moments they focus on capturing. Their steady stream of updates clog our life feeds and keep us from connecting with our more important but less active friends. The real danger of social media is the people who abuse it. It is no wonder some of the most respected people in social media are openly calling for an end to the nastiness with a single day of positivity in social media on August 14th.

So as the Olympics continue, instead of turning to social media as a convenient place to vent about your disgust for why swimming finals are broadcast on a time delay – how about following Athlete twitter feeds to read about their experience of the Games?  Or what about spending your lunch hour watching a great Olympic table tennis match on a live stream?

The point is, there are plenty of ways to enjoy the global spectacle of the Olympics without spoiling it with your social media outrage and oversharing.  With the US Presidential election just a few months around the corner, why not save your criticism for the political ads and campaigns?  At least they deserve it.

7 thoughts on “Olympics Newsflash: Social Media Isn’t The Problem, YOU Are The Problem”