Today marks the launch of Jumo, the new long awaited social networking platform from Facebook co-Founder Chris Hughes. In a recent interview with the Huffington Post published today, Hughes described the mission of the site this way:

Most every site that's out there focuses on donations. And, don't get me wrong, donating to organizations, especially right now, is really important. But Jumo is taking a very different approach. It's not just about how much money are donating to this or that group. It's about what kind of relationship you are building with that organization.

As anyone who has ever worked on a nonprofit communications or marketing plan will tell you, the single biggest challenge when it comes to cause related marketing is motivating people to act on what they feel. You might hear about underpriveleged youth or dwindling trees in the rainforest and most of us will have an instinctual emotional reaction that these things are terrible and we should do something to help. The problem is that this emotion is tough to turn into real action – whether that action involves donating money or offering time.

Some have argued that this difficulty is leading nonprofits into a wrongheaded attempt to make supporting a cause nothing more than a click (mockingly called "slacktivism") – which devalues the importance of real contribution via time or money, and offers people a chance at "moral self licensing" where they feel they have done their good deed and therefore stop trying to do more.

Jumo's big insight, as Hughes shares in his launch blog post, is that there can be multiple levels of engagement and if a social network can make it easy to do everything from support a cause you care about simply by clicking a "like" button – to actually donating money or agreeing to volunteer, then that is a big win for the entire nonprofit community. On Jumo, I can support causes as much or as little as I like, and find all of them in one place. The mission of the site is clear, and it's promise is huge.

The most powerful part of this idea, however, may be its directory aspect that first launched early Internet superstar sites like Craigslist and Yahoo. In a world where we have far too much noise and demands on our attention – something like Jumo could offer a one-stop shop for anything related to doing good by supporting a cause related organization. At least in part it is based on the assumption that there is a large population of Internet-savvy people who would do more if it were just easier. Whether you think Jumo can succeed at its mission or not, it's hard to argue with that. 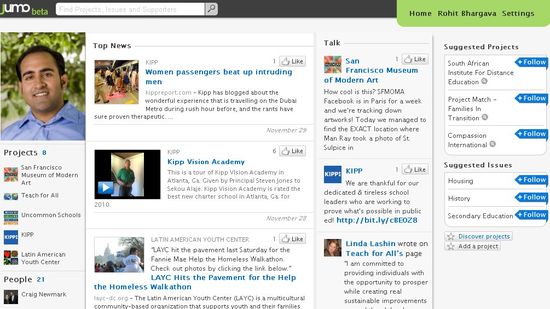