I spent this week at what is probably the largest tradeshow in the world.  The sheer size of CES means that information overload is inevitable, and the consistent challenge for any exhibitor at a show like this is rising above the clutter.  If you think about it, this challenge is no different from any other tradeshow or exhibition … though CES is surely more difficult to stand out at than most.  Throughout the show, there were a few vendors that did do something noteworthy to stand out.  This post is about how they did it and some marketing lessons you can learn from their efforts. 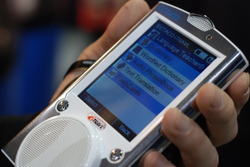 There was one vendor that I discovered while walking through one of the exhibition halls called Ectaco that had one of the most interesting handheld devices I have seen – the Ectaco iTRAVL NTL-9c.  It was basically an automatic translator which could immediately translate words and phrases into one of 36 different languages.  I gave it a try with English to Hindi, and it translated several phrases perfectly and delivered them in a non computerish sounding voice.  Most surprising of all was that they were selling them right off the floor for $599.  This was not future technology or experimental, it was a real product being sold today.

Now for all I know there are 12 vendors that all make the same product and this company is no different than any of them.  So what made this one so different?  I think the answer lies in 5 critical things that the product manager with whom I spoke, Boris Krol, managed to do to help his product stand out from others:

In addition to the automated translator, there were a few other marketing lessons from elsewhere in the event.  Here are a few other lessons I would add to the list of things to consider the next time you are exhibiting at a tradeshow which don’t relate to Boris and his automatic translator, but are interesting nonetheless:

All in all, CES was a great place to learn about marketing at tradeshows simply because there are so many examples and techniques people are using.  Standing out at a Tradeshow is not an easy thing to do.  Standing out at CES is even harder.  If you have a show that you are exhibiting at coming up, hopefully this list of ideas helps you get ready to see the most benefit from it.  Let me know if any of these ideas work for you.

16 thoughts on “7 Ways to Stand Out At A Tradeshow: Marketing Lessons From CES”