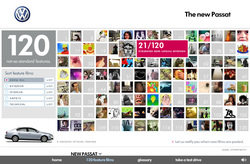 About a month ago, I read about VW releasing a new microsite as part of their marketing for the new Passat where they would include 120 short videos produced by 5 different production companies to highlight the 120 "not-so-standard" new features on the car.  Over the last few months, there have been lots of other signs pointing to the arrival of online video as more than just a venue to send short clips of silly stuff like Al Roker falling over while reporting a hurricane.  As broadband penetration has inched higher and higher, the promise of online video was always there – but now with mainstream products like the new iPod Video, the Sony Playstation, and other devices making online video downloads less for geeks and more of a hip activity … online video has hit mainstream.

Looking at the Passat site, it is an interesting combination of curiosity marketing (something I have posted about before) and great use of online video through extremely short montage style videos that illustrate the level of thought and innovation that have gone into the new Passat.  Though I doubt people may run out and buy the car from watching several short online videos about features such as the "impact deformable steering wheel" – the site does create an immersive experience and demonstrate the many benefits of the new car in a way that online users are likely to interact with.  I just bought a Passat two years ago, and they made me want to at least see the new one in person to find out about these 120 features.  For an online effort, I’d say they achieved their goal.